Let’s start with the kitchen update: it’s still not finished.

We had a damaged cabinet to reorder and a lot of rainy days causing rescheduling. I have my oven and fridge, thank goodness, but can I please tell you how unpleasant washing dishes in a bathroom has been for the past 3 weeks? I will be crying tears of joy when my new farmhouse sink and dishwasher get installed.

Venting aside, I know all this hard work and inconvenience will pay off in a big way. I’m so excited to get it up and running, because I have a lot of recipes I am itching to try out.

Despite our house being a work in progress, we decided to have a couple of friends over to watch the Super Bowl a little while ago. When you have no kitchen and the big game is on, the only logical solution is to set up your deep fryer in the backyard and make wings. 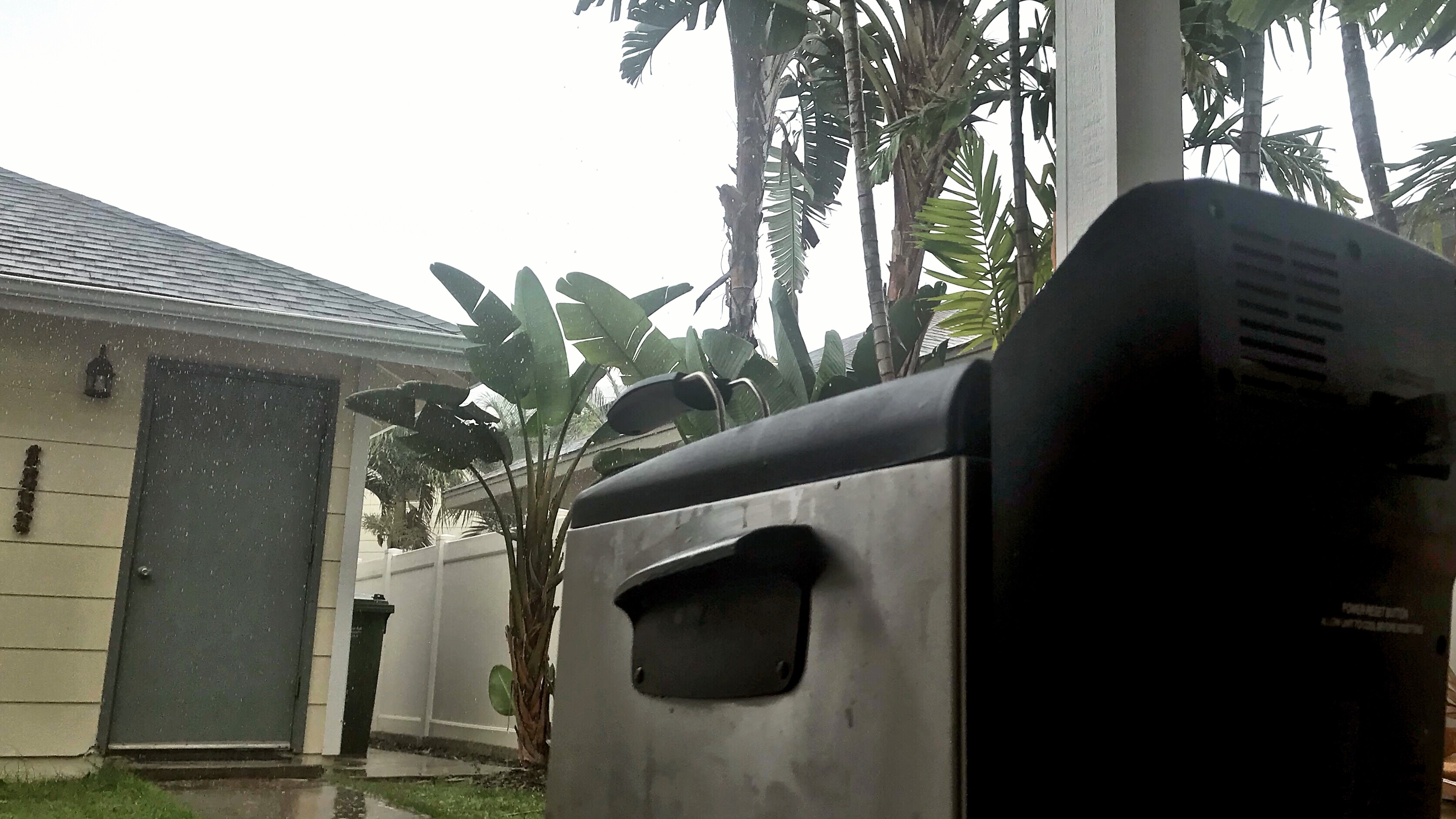 We already had buffalo chicken dip on the menu, so I wanted to stray from the traditional hot wing flavor. I grabbed a bottle of sweet and sour sauce from the grocery store thinking it might be good, but at home I realized it was way too sweet, so I got creative. I threw all this extra stuff in from my fridge and panty (which right now is a bunch of bins in the front bedroom) and the sauce turned out better than expected. 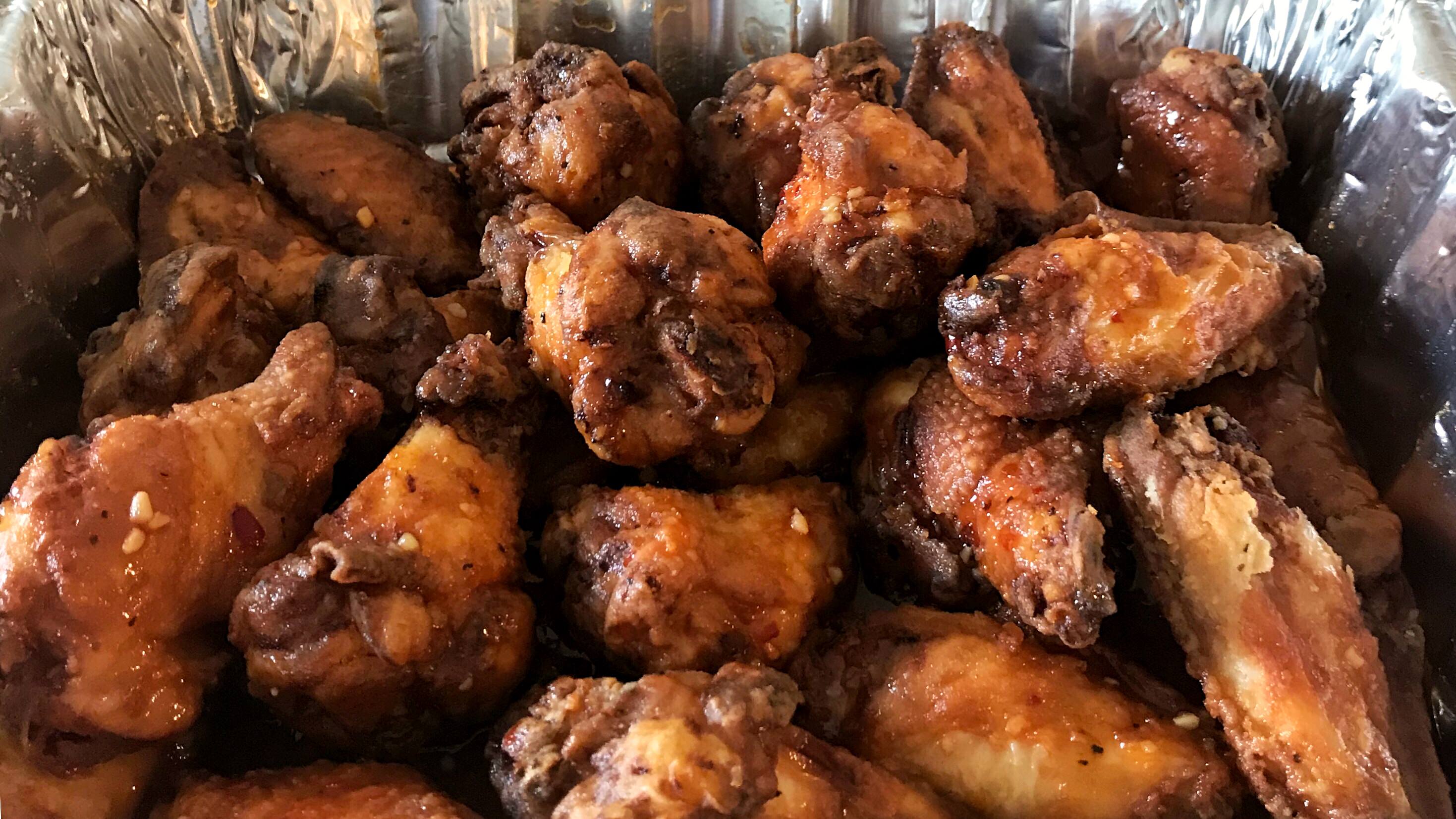 The outcome of the game wasn’t great, but at least the wings were.

I guess you could say I…. winged it. I didn’t take notes that day, but I managed to recreate the magic for today’s post. Let’s get started!

*I used the liquid from my pickled red onion garnish. If you do not have anything pickled to borrow the juice from, increase the water to 2 cups and the salt to 2 Tbsp

If you are having a large party, you obviously need to double (or triple) this recipe. In that case, you can keep cooked wings in the oven on the warming setting while you fry the rest of the them. Also, I highly recommend getting some of those deep aluminum foil pans from the store to carry these babies back and forth in. It makes clean up so much easier, especially if you pour the sauce over the wings in one of those instead of another bowl getting messy.

The first time I made these for the Super Bowl, I didn’t add any onions at the end. I put out some blue cheese for people to dip with, but honestly, I wasn’t feeling it. When I was gathering what I needed for this second trial, I happened to notice I had some green onions to use, so I tried those first. YUM! 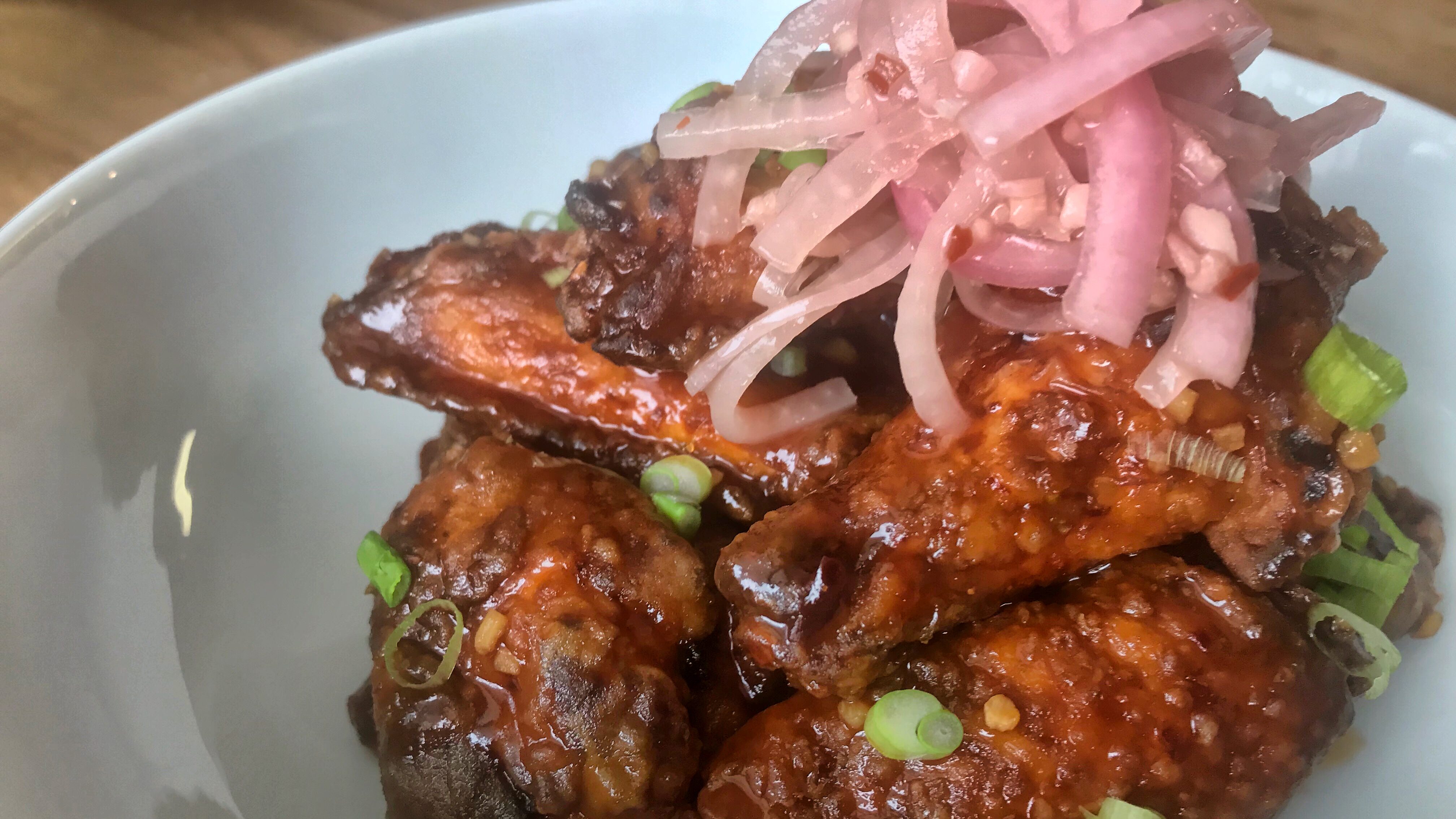 I could use a heart-shaped eye emoji right about now.

Then I got crazy and decided to throw some pickled onions on there too, and oh my goodness. The two kinds of onion added another level of texture, aroma and freshness to cut through the sticky, rich sauce. Maybe I’m the only one who’s this in love with pickled veggies, but if you have been following me for a while, you know I always have something pickled in the fridge. Red onions, carrots & celery cut into matchsticks, sweet peppers, hot peppers… all my leftovers end up in a jar.

Here is a great guide to quick pickling if you are interested in trying it out! It’s super easy and then you always have awesome stuff to top off a dish (especially sandwiches).

If you are not into deep-frying or don’t want to deal with mess, you could always bake the wings. Frying really get the wings crispy fast though, which locks in all the flavor. Also, when you are smothering something sauce, I don’t see the point in adding a bunch of seasoning to the coating. Simple flour is all you need. 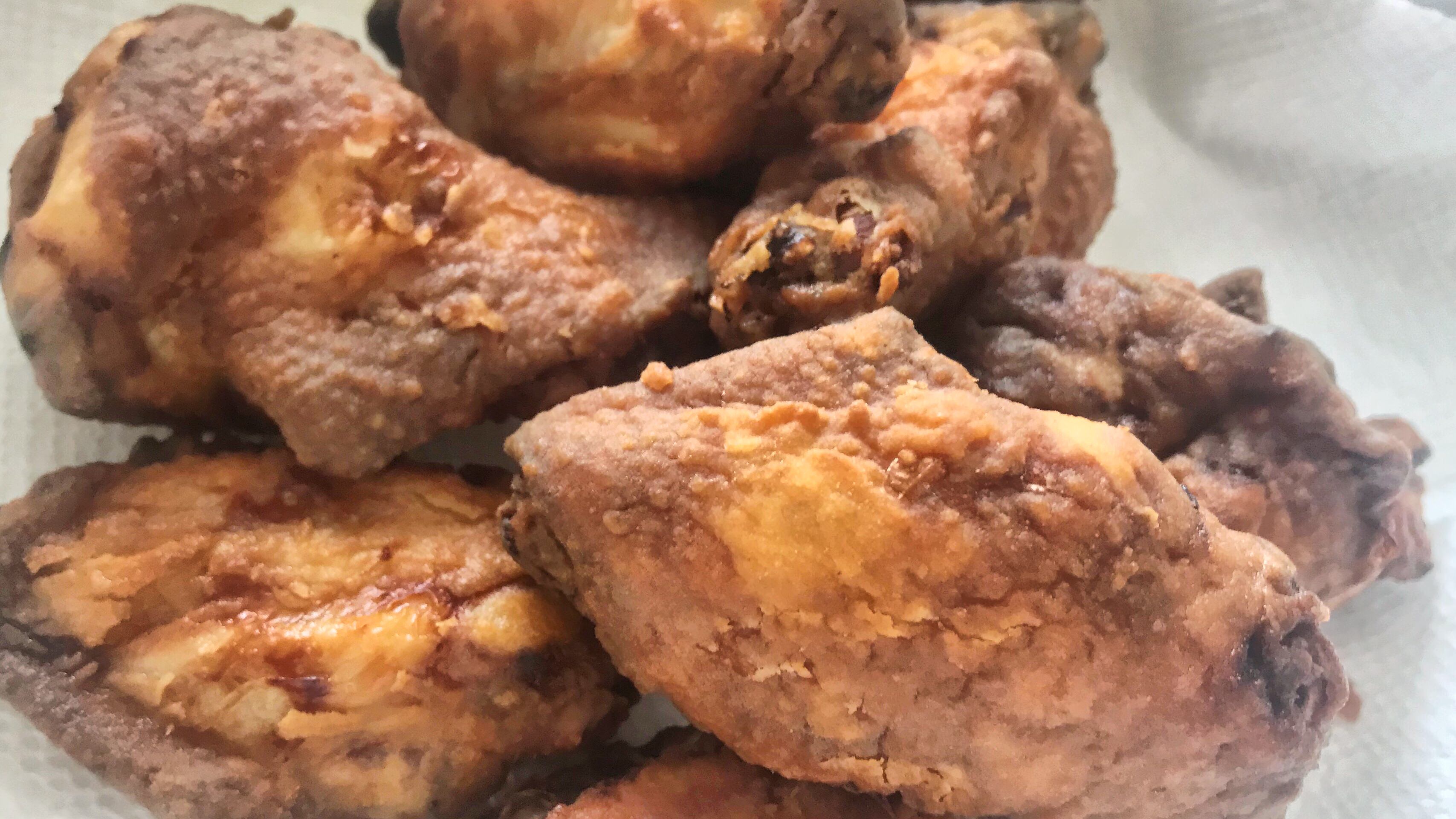 Wings straight out of the fryer, looking good enough to eat without sauce.

Brining is the other key to having yummy, juicy wings. Even if it’s only a salt water brine, do it. I added the sweet pineapple juice and vinegar-y pickle juice to impart more flavor and because the sugars and acids would tenderize the wings. I swear, when I bit into a couple of them, I got this amazing burst of pineapple right before the spice kicked in.

I’m not going to lie, wings aren’t the easiest, breeziest thing to execute. It takes a long time and some patience. You’re going to make a mess. But once you start eating these, and reap the benefits of all that hard work, it’s worth it.

It’s a little bit like remodeling a kitchen that way.

Boom, mic drop. Tied the wings right back to beginning of my post. Too bad I don’t take myself seriously enough to write a three paragraph poetic metaphor about chicken and kitchens. You’re not here for that anyways, you were here for these: 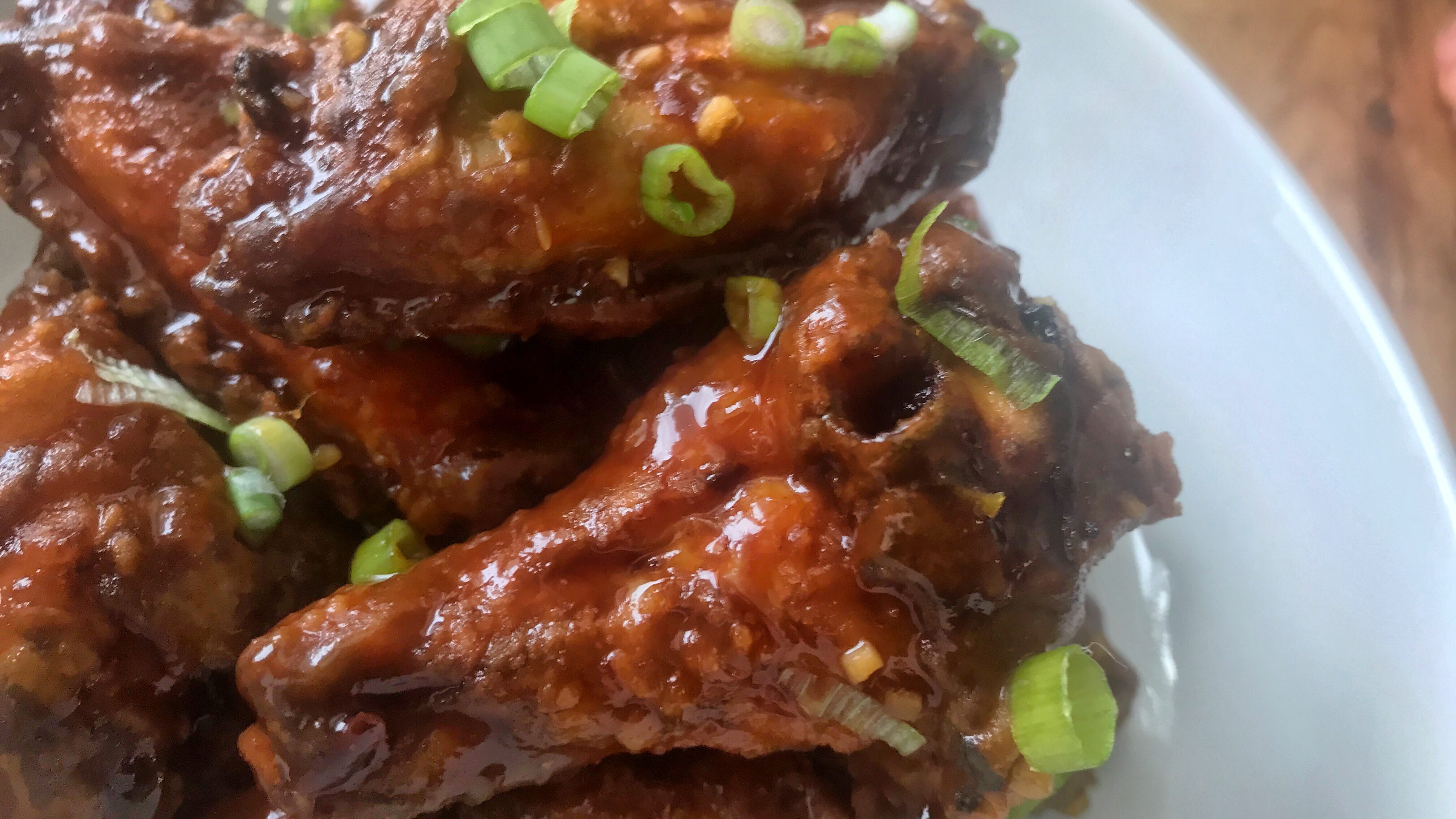 I’m so glad to be posting recipes again. I’ll be back in a couple weeks with more food and more updates! See you then.