Life keeps finding a way to keep me from my blog. I had a post halfway written (now being saved for later) that I got distracted from by the whole Hawaii false alarm missile incident.

If you somehow missed the news, every cell phone in Hawaii went off at 8:07am on January 13th saying a missile was incoming, and 38 minutes later they let everyone know it was a mistake. 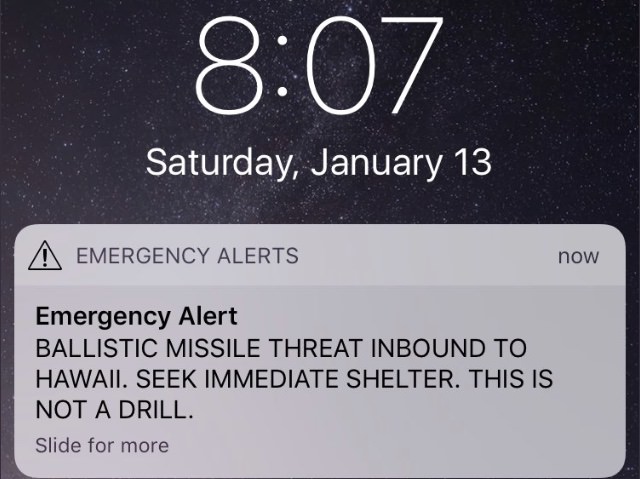 The “this is not a drill” part… what would you think? My husband was trying to stay calm, noting that there were no sirens going off outside, so something seemed off. We both were searching for answers on the news and online, but I remember my mind shifting from “is this real?” and “how do I keep myself safe?” to accepting it was happening and this was how I was going to die. I starting thinking about what to say to my family as I refreshed Twitter one last time before I had to start writing it. That’s when I saw the Hawaii EMA say it was a false alarm.

It was about 15 minutes after the alert message. We drove by and told people who were outside their houses looking for answers that it was safe. Eventually, the correction was texted to everyone, but way too late.

Those minutes felt endless at the time. It was hands down the most terrified I’ve ever been. After the anger and frustration about this stupid error faded, it was this bizarre high. The relief of finding out we were safe was literally intoxicating. I couldn’t stop laughing and smiling. It was a morning filled with intense emotions, covering the whole spectrum.

So yeah, blog post didn’t happen. A lot of quiet and unexpected reflection happened. A lot of random giggling fits, but also some moments of leftover panic. A lot of plans made. A lot of nice time with my little family. Also, after the incident, I ate a whole carton of ice cream that afternoon. And drank a lot of beer. Because that’s my natural response to realizing you only live once.

That’s the story, or rather, that’s as much as I feel like sharing. Half of me feels like I had to tell it, because we really thought we were going to die, and that’s a really unique, intense thing to go through. The other half of me feels like I’m being self-indulgent and boring, since I obviously didn’t die and nothing actually happened. I tried to keep it factual, because I don’t want anyone to think I’m going to start posting inspirational quotes over pictures of sunflowers and tell you how you can live your best life or anything like that.

My one piece of advice from the whole thing, I suppose, is if you aren’t happy, and you aren’t being honest, what’s the point? That’s the short version of the millions of thoughts I had that day and after.

For a month, I had this empty kitchen: 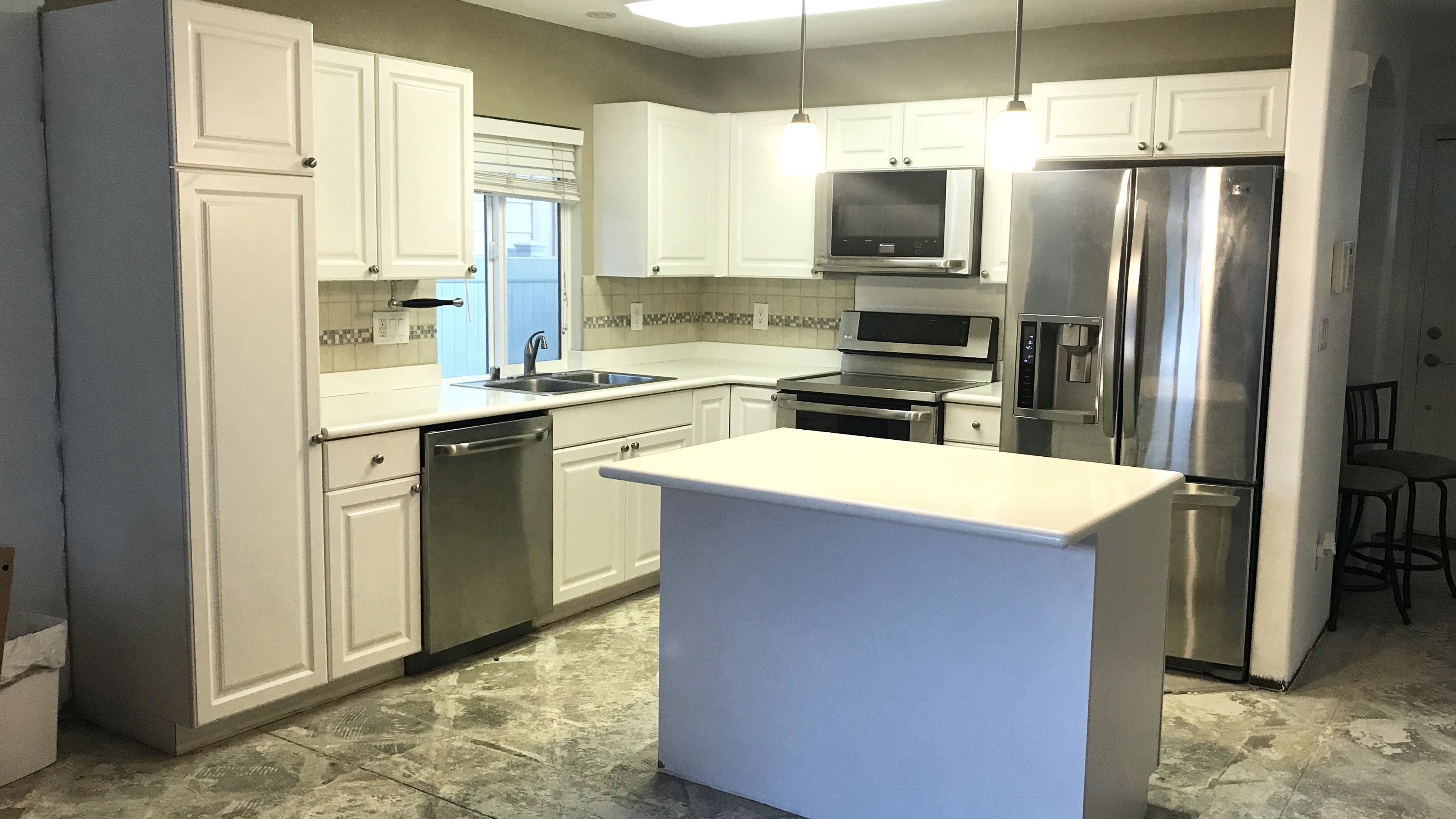 There was some pretty great peach colored tile before, but this picture is after we ripped them out

All of our furniture and belongings arrived on a Friday. I had one weekend (the one of the false alert incident, actually) of a fully functional kitchen before they came and tore it out the next Tuesday. Now we’ve started laying down the new floor, so currently the kitchen looks like this: 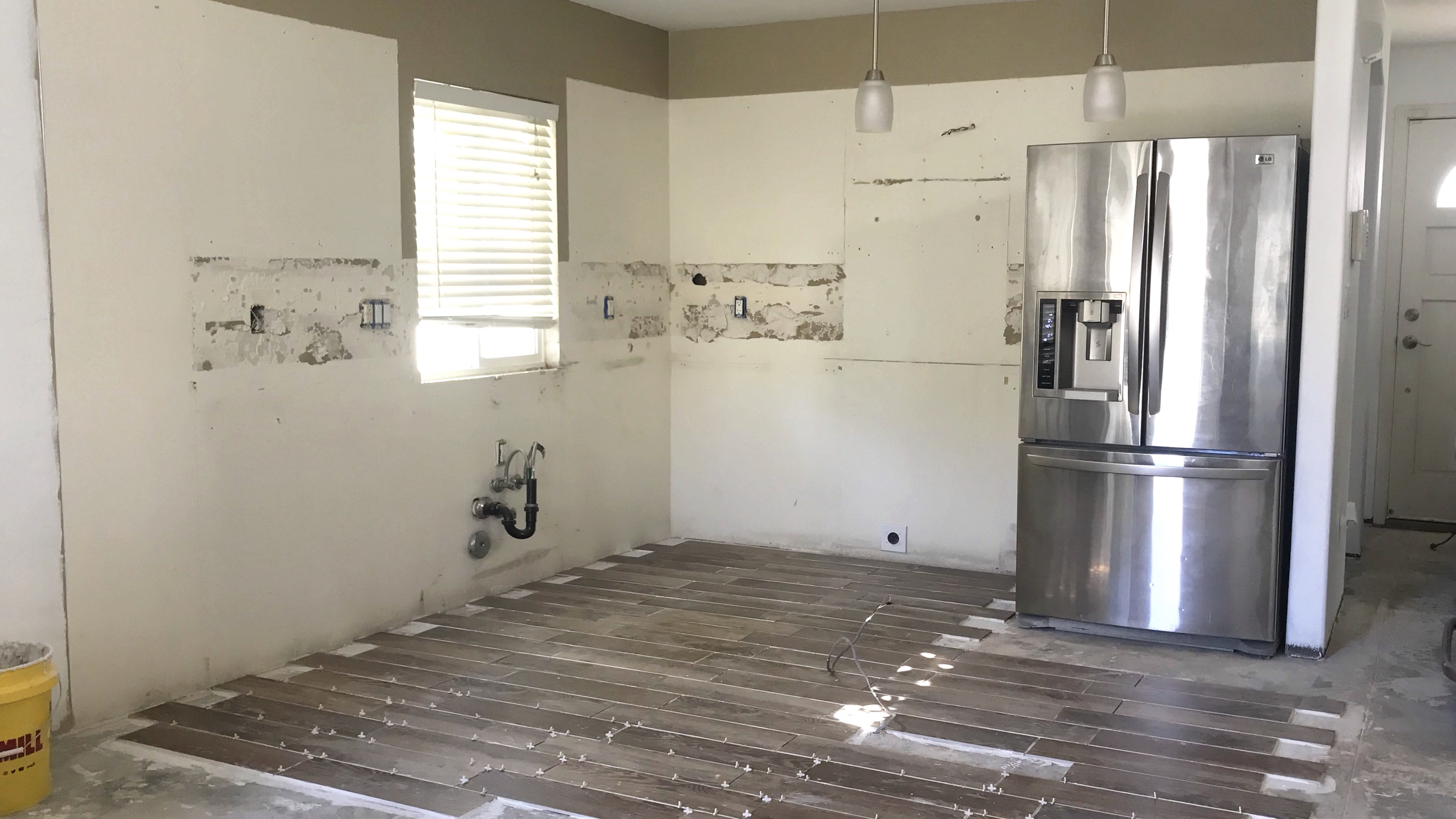 So much room for activities… kind of

Soon we’ll be able to get the stove back in place so cooking will be a lot easier. I’ve spent the past week getting reacquainted with things like my slow cooker and my toaster oven. It’s annoying having to dig through boxes to find tools and having no real work space, but it’s also a little fun figuring it out. I think I’ll be doing a post reaaaally soon about some of the “hacks” I’ve had to come up with to adapt.

Knowing that soon we will have a brand new kitchen is exciting, but a little scary. This is our first house and we don’t want to go broke, but of course we have to make it our own. My husband and I are both pretty creative people and he grew up working construction in the summer, so we are doing as much as we can on our own. Maybe we could have waited a little longer to jump into fixing it up, but we aren’t going to be here forever, so it makes more sense to us to make the house our own ASAP. Then we can just sit back and enjoy it.

And I can finally, FINALLY get back to cooking again. In my beautiful new space that I get to design myself, for the first time ever. I wish that I had the time and space to work on the recipes and ideas floating around in my head because it’s been such a long time, but I keep reminding myself how awesome it will be when it’s all done.

I’ll keep you up to date on our progress and when I can start busting out recipe posts! It’ll be soon… at least that’s what everyone around here keeps saying… because remodeling always goes perfectly on schedule right?