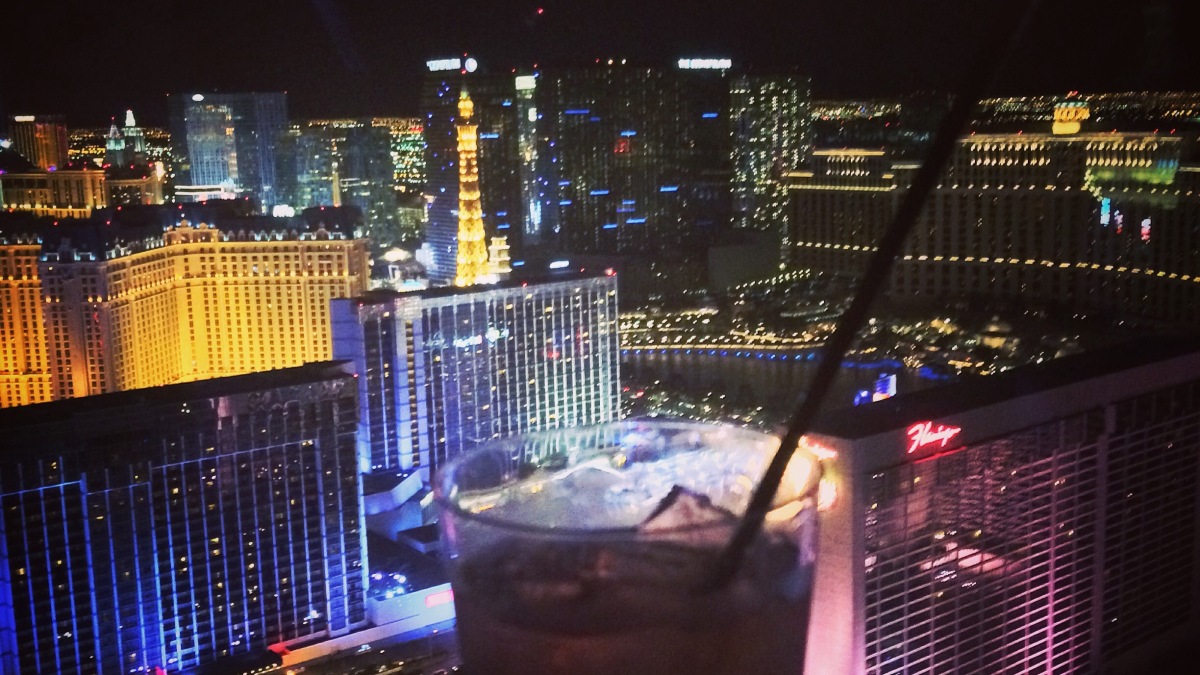 I am so exhausted, but it’s completely worth it. I just spent a whirlwind 36 hours in Las Vegas. I was with my husband and a group of seventeen of his friends from the Navy and some spouses. It was such a fun group and a great bonding experience, to say the least!

We drove from Ventura to Vegas on Friday evening, arriving at around 10pm. We were quick to get all dressed up and hit the night club, Light, at Mandalay Bay where we were all staying. I haven’t been up dancing that late in, well… a very long time. My one bad decision of the whole trip was taking a shot (I do not do shots) with all the girls about halfway through the night. In the grand scheme of things that can go wrong in Las Vegas, my dull headache the next day wasn’t that awful.

So when you wake up at 10am, after 6 hours of sleep, mildly hungover, what do you do? Brunch and cocktails, of course.

I got a mimosa, and my husband got this ridiculous ultimate Bloody Mary from Citizen’s Kitchen & Bar. Yes, that’s a crab leg, a jumbo shrimp and a huge beef jerky strip in there. The photo also doesn’t do it justice, it was the biggest Bloody Mary I’ve ever seen. I needed something to soak up all the fun I had the night before, so I opted for this big Belgian waffle for my meal.

As a group, after chowing on waffles, egg sandwiches, chicken sandwiches, fruit cups, gravy smothered waffle fries and mac and cheese (to name a few of the wonderful hangover cures) we headed out to the pool to relax for the afternoon.

Night two started at about 6:30pm with all seventeen of us going down the road to New York, New York for dinner at Tom’s Urban. I had such a good time, I forgot to snap any photos there. It happens. My husband and I split a margherita flatbread pizza, that was surpisingly salty, so you aren’t missing a lot. I have eaten at Tom’s Urban in Los Angeles and had a great meal, I just don’t think I’ll be getting the pizza again.

Next on the agenda was heading over to the Linq and doing the Happy Half Hour on the High Roller. Similar to the Londen Eye, the High Roller is a giant Ferris wheel with capsules that hold up to forty people. One rotation takes a half hour, and we went for the slightly pricier tickets that included an open bar for the entire ride. I didn’t chug down as many cocktails as some of the group, but I managed a couple vodka cranberries while taking pictures of the Vegas Strip from 550 feet in the air. That’s where the featured image from this post was taken. This was the highlight of the trip to me. It was a lot of fun and the view was incredible at night.

When we were done, it was on to the Omnia night club at Caesar’s Palace. It was another fun night of dancing, but after the first night I went pretty easy on drinks and my husband and I ducked out around 1am and caught a cab back to Mandalay Bay. We changed into comfier clothes, met up with another couple from our group and found the once place still serving food at the hotel, Ri Ra Irish Pub.

These are Irish potato cakes and they might be the most perfect dish after two nights of drinking. They were made with cheese and chives, and topped with sour cream and a thick balsamic drizzle. Ah-maz-ing. I wish I had them right now. I also wish the photos were a little clearer, but it was a dark pub. My husband got shepherds pie, not pictured, and we also split some boneless chicken wings. Warning! The medium heat wings from Ri Ra were intense. I love spicy food and could handle it, but I would not want to try the hotter sauces. We all probably benefited from sweating out a little alcohol.

After a another short night of sleep, a couple of us headed back down to Citizen’s for a quick breakfast before checking out. I got a smoothie, a bagel and this lovely fruit bowl. I could almost hear my stomach thanking me for the vitamins and fresh food. It was the perfect ending to an indulgent weekend.

Soon after, we drove back, luckily beating most of the Sunday traffic. By 5:30pm I was back on my couch, snuggling up with my pup. It was a fast and fun trip, with good food and great people, but I am happy to be home and to get back to normal. I’m glad I paced myself and didn’t feel the need to keep up with the younger half of the group, but I can safely say I won’t be touching hard liquor for a long time.

I also just realized, I didn’t gamble once! Well, I guess I’ll just have to go back some day and try my luck. And try some more restaurants.